The objectives and purpose of the Delaware Valley Jaguar Club (DVJC) are to promote, foster and encourage a spirit of mutual interest and assistance for Jaguar automobile enthusiasts; to promote favorable relationships with the general public; to be a technical guidepost to Jaguar owners; to be a social organization; to exchange ideas; and to promote and demonstrate driving proficiency and safe driving habits in accordance with applicable laws. The DVJC is organized for pleasure, recreation, and other similar nonprofit purposes.

The Delaware Valley Jaguar Club was formed in 1965 as the Philadelphia Division of the Jaguar Clubs of America.  Founding club president Frank Weikel, who owned an XK150 Drop Head Coupe at the time, was inspired to create a club for Jaguar owners and enthusiasts like the ones he had encountered in the UK while on a business assignment there.  Upon return he petitioned the Jaguar Clubs of North America (JCNA), to form a club to fill the geographic void between the existing clubs in New York City and Washington, DC.  In September 1965 a handful of Jaguar enthusiasts led by Frank met with representatives of JCNA and officials of Jaguar Cars, Inc. to officially form the Philadelphia Division of Jaguar Clubs of North America.  The club’s first publication “The Scratching Post”, a one page flyer, generated interest among local Jaguar enthusiasts rapidly swelling the membership to 45.  The first club activity, other than organizational meetings, was in March of 1966; a motoring trip to Gross’ Highland Winery followed by dinner at Historic Smithville Village. 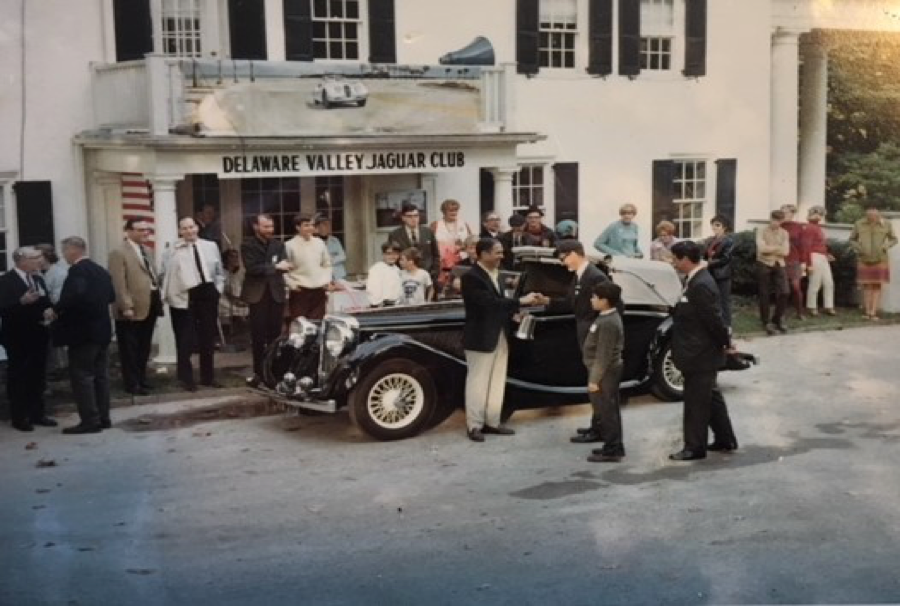 The first DVJC Concours d’Elegance was held in 1967 at the Glenhardie Country Club in Valley Forge, PA.

In 2015, celebrating 50 years as a vibrant club supporting the interests of Jaguar owners and enthusiasts in the Delaware Valley, the Delaware Valley Jaguar Club hosted the Jaguar Clubs of North America Annual General Meeting in Philadelphia.  The JCNA Annual General Meeting brings representatives of Jaguar clubs across North America to discuss, review and revise by-laws, Concours rules and matters pertaining to the national club.

Today the Delaware Valley Jaguar Club continues to be an active and vibrant organization of over 200 Jaguar owners and enthusiasts who participate in a wide variety of club events including Rallies, a Slalom, a Concours d’Elegance, Jaguar Gatherings of Friends hosted at members’ homes, monthly breakfast socials and numerous other events.

The Coventry Foundation has been established with the objective of preserving the Jaguar Heritage for future generations.  DVJC embraces and supports the foundation’s development including the recently established museum in Petersburg, VA. Your individual support is encouraged. Visit their home page.